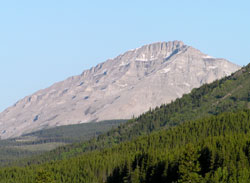 50.2719N -114.759W
Located on the continental divide in upper Henretta Creek, northwest of the headwaters of Cataract Creek

Frederick Etherington (1878-1955) Born in Gananoque, Frederick Etherington was a Queen's medical student from 1898-1902. He was said to have been a great athlete, serving as captain of the football team, as well as playing on the lacrosse and baseball teams. In 1907 Etherington was appointed as a professor of anatomy (the first one in Canada) at Queens University. In 1911 he became the first full-time surgeon in Kingston. He was very active in prison reforma and made many recommendations on how the living conditions of prisoners should be improved. The mountain is likely named for his wartime contribution when he organized and commanded the No. 5 Stationary Hospital in Egypt, which was staffed by recruits from Queen's faculty and students. In 1916 the hospital was transferred to France and became the 7th Canadian Hospital. In 1923 Etherington became Dean of Medicine at Queens. During this time he also served as president of the Ontario College of Physicians and Surgeons and of the Medical Council of Canada.