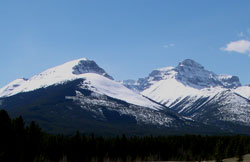 Photo: Survey Peak (left) and Mount Erasmus (right and beyond) from the Icefields Parkway at Saskatchewan River Crossing

Peter Erasmus was a remarkable and important individual who played a role in the events which transformed western Canada from the open, buffalo-covered plains into towns and Cities. He served as guide to the Palliser Expedition, spending the majority of his time with James Hector. A well educated man, Erasmus was fluent in six Native languages as well as English, Greek, and Latin. Following his service with the Palliser Expedition, he settled at Whitefish Lake where he was an interpreter, guide, trapper, hunter, and trader. He assisted in negotiating Treaty #6 after which he worked for a time with the Department of Indian Affairs. At the age of 87, Erasmus told his life story to Henry Thompson, a Metis and journalist, who wrote it down. The manuscript subsequently was published in book form as "Buffalo Days and Nights." Erasmus's personal comments regarding John Palliser and James Hector offer insight into the personalities of these two important figures in the history of the Canadian Rockies. [Additional Information: Erasmus, Peter. "Buffalo Days and Nights". Calgary: Glenbow-Alberta Institute, 1976]