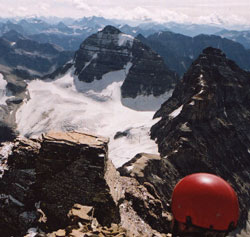 50.8347N -115.624W
Located on the continental divide at the head of Marvel Lake Valley between Mount Aye and Mount Gloria

Mount Gloria, Eon Mountain, Mount Assiniboine, and Aye Mountain form a spectacular group at the head of the Marvel Lake Valley. Eon Mountain and Mount Aye are the second and third highest of the four, a sizeable glacier lying in a basin below their northern slopes. Eon Mountain features a sharp, pointed summit. In 1920 Dr. Winthrop Stone and his wife Margaret visited the Jubilee Camp of the Alpine Club of Canada at Lake Magog at the base of Mount Assiniboine During their visit, Dr. and Mrs. Stone had taken a photo of Mount Gloria, Mount Eon, and Mount Aye which tower at the end of Marvel Lake. All three were unclimbed at the time and Dr. and Mrs. Stone were, "anxious to crown a big one." The following summer the Stones returned to camp at Mount Assiboine. This camp was operated by Arthur Wheeler as part of his "Walking Tours." The tours provided permanent camps along the way for lunch breaks and overnight accomodation. Cabins were built at the mouth of Bryant Creek and at Lake Magog. On July 15th Dr. and Mrs. Stone set out to cross over Wonder Pass, descend to the Marvel Lakes valley and from there reach Marvel Pass and make the first ascent of Eon Mountain via its southeastern or southern slopes. Tragically, Dr. Stone fell to his death shortly after completing the first ascent of Mount Eon. Leaving his wife on a ledge forty feet below the summit, Dr. Stone reaching the peak by way of a chimney. According to Conrad Kain, who was part of group which searched for the Stones, "without any warning, a large slab of rock tumbled off from above, passing over Mrs. Stone, and was closely followed by Dr. Stone, who spoke no word but held his ice-axe firmly in his right hand. Horror stricken at the sight, Mrs. Stone braced herself to take the jerk of the rope, not realizing that the doctor had taken it off to explore beyond its length." The accident had occurred at about 6:00 pm and Mrs. Stone spent the night, in shock, very close to the summit. Her water, food, sweater, etc. were all in her husband?s pack. The following day, after unsuccessfully looking for her husband, she descended to the lower cliffs of Eon Mountain. The next morning she lowered herself to a within ten feet of a ledge that she thought would allow her to reach a scree slope that led to the meadows below. The rope was short and she dropped the last ten feet only to find that the ledge was isolated and she was trapped. Mrs. Stone spent eight a total of seven days and nights alone without food or significant amounts of water until rescued, late in the day, by Rudolph Aemmer. Aemmer had travelled from Banff with a rescue party that included warden Bill Peyto and Constable Charles Pounden of the Royal Canadian Mounted Police. Aemmer fashioned a sling out of rope so that he could use his hands to climb and to hold his axe. He had to carry Mrs. Stone up a chimney before they could descend. He later wrote, I had to carry her for 4 1/2 hours on my back" until they reached the timberline. The rescue party and Mrs. Stone stayed at timberline for two days before carrying Mrs. Stone to Marvel Pass on a stretcher. They spent a further two days on the pass before travelling to the lakes in the valley below. A raft was built to carry Mrs. Stone to the east end of Marvel Lake. A Calgary Herald reporter visited the rescuer's camp on Marvel Creek after she had been moved off of the mountain. His article appeared in the July 29, 1921 edition. On August 5th, the search party (Albert MacCarthy, L. Lindsay, Edward Feuz jr., Rudolph Aemmer, and Conrad Kain) ascended the peak, Conrad finding Dr. Stone's ice-axe during the climb. A cairn was built, crowned by Dr. Stone's axe. By August 10th, Mrs. Stone had recovered to the point where she could reach the Bow Valley. Rudolph Aemmer was awarded a special citation by the American Alpine Club. His response was, "Real guides cannot be heroes. When somebody gets into trouble in the mountains, we go after him, take the necessary risks, and bring him down. Nothing else counts." Constable Pounden was awarded a commendation from American Alpine Club for his part in the rescue of Mrs. Stone. He had joined the RNWMP in 1919 and retired from the RCMP in 1930. A poem chronicling this tragedy, ordeal, and rescue, "The Agony of Mrs. Stone" was written by Jon Whyte. It begins: THE AGONY OF MRS. STONE A statement isolated between a question it poses a question unanswered - how she endured seven days on the mountain Her husband fell from the summit of Eon into death's isolation "I can see nothing higher" he had shouted from the mountain's height then fell... From [Ford, Theresa M.; "In Jeoprady" from the series "Western Canadian Literature for Youth"; published by Alberta Education c1979] See also (Canadian Alpine Journal 12-14; 12-86)

Looking west-southwest to Eon Mountain from the Smith-Dorrien Road