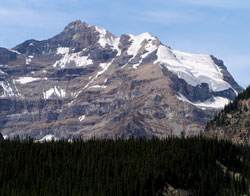 Photo: Looking southwest up Woolley Creek to Mount Engelhard from the Icefields Parkway

Georgia Engelhard 1906-1985) A native of New York, Georgia Engelhard enjoyed hiking in the eastern US as a child and studied art in college later and after abandoning painting, and focused on photography. She had visited the European Alps in her teens and climbed with her father in the Mount Ranier area in 1926. Later that year the family visited the Canadian Rockies and Georgia climbed Pinnacle Mountain with Edward Feuz jr. She was a regular visitor to the Rockies, visiting fifteen summers during the next three decades. Georgia grew to love the Canadian Rockies. After reaching the summit of Mount St. Piran in 1929 at the age of 23, she wrote: "The lake and valley were still in deep shadow, but the surrounding peaks, all I had climbed, were bathed in golden rosy light. I was seized by an indescribable ecstasy, filled with the joy of conquest. They were all mine -my beautiful, private, world of mountains. Yet, at the same time, I felt how infinitesimal I was. It was an unforgettable experience." During 1931 she climbed a total of 38 peaks in the Rockies and the Selkirks. She stood on the summit of Mount Victoria eight times that summer, seven of the trips being part of the filming of the movie, "She Climbs to Conquer." An outstanding lady climber who completed 32 first ascents in the Rockies and Selkirks she, to some extent, competed for first ascents with Katie Gardiner who completed 33. In 1935 she climbed in Europe for the first time. She was joined by Eaton "Tony" Cromwell (Mount Cromwell), a veteran mountaineer whom she married in 1947 after several years of climbing together in the Canadian Rockies. They retired to Switzerland spending their final years enjoying the Alps together. During the last forty years of her life, Georgia never returned to the Canadian Rockies where she had spent much of her youth. [Additional Information: Smith, Cyndi. "Off the Beaten Track". Lake Louise: Coyote Books, 1989]