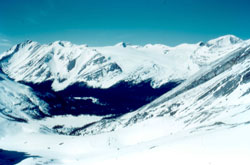 Thomas Drummond (1793-1835), a native of Scotland, was the first botanist to visit the Canadian Rockies. His abilities and enthusiasm caught the attention of William Jackson Hooker (see Mount Hooker), then professor of Botany at the University of Glasgow. This was the beginning of a lifelong friendship and Hooker arranged for Drummond to be appointed the assistant naturalist on the second Arctic expedition of Sir John Franklin (1825-1827) (see Franklin Peaks). In this capacity he was introduced to much of the Northwest Territories. During this trip he was working with Sir John Richardson (see Mount Richardson). In the autumn of 1825, Franklin and Richardson decided to spend the winter at Great Bear Lake but sent Drummond on a one-man botanical expedition to the Rockies. After spending the winter near Edson, Drummond travelled widely in the Rockies collecting some five hundred varieties of plants. Probably the best known one that bears his name is the yellow-flowered dryas, whose silky seed plumes spread a silvery sheen over gravel bars throughout much of the Rockies. Richardson referred to him as a great botanist, one of untiring energy and unrivalled quickness of eye. [McGowan]

Photo: Looking southeast to Mount Drummond and Drummond Glacier from Singing Meadows in the Pipestone Valley

Photo: Looking southeast to Mount Drummond and the Drummond Glacier from Singing Meadows in the Pipestone Valley