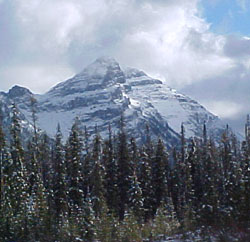 Photo: Mount Doolan from the north

Province: BC
Park: Top of the World
Headwater: Kootenay
Year Named: 1960
Named for: Doolan, Sgt. Terence J.H. (From Cranbrook B.C. F/O Doolan was a nineteen year old pilot with the RCAF when he was killed on 12 November, 1943. His Fleet Fort aircraft was on a training flight with #2 Wireless School in Calgary.) WW II