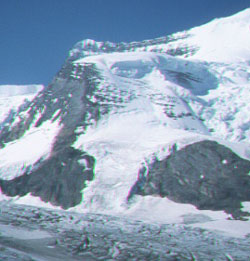 Photo: The Dome from the southeast on Robson Glacier (courtesy Alan Kane)

53.0986N -119.139W
Located in the Fraser River Valley: the southwest shoulder of Mount Robson; to the right of the peak when viewed from the Fraser Valley.

This feature is not actually a separate summit but just a shoulder of Mount Robson. It was first climbed during one of Arthur Coleman's early attempts to climb Mount Robson. Describing the view from the Robson Glacier side of Mount Robson, Arthur Wheeler wrote (1911), "Midway between the Helmet Ridge and the head of the amphitheater is a great rounded shoulder, jutting out from the east wall of Mount Robson. It is completely covered by snow, and presents great yawning crevasses, ice cliffs, and steep slopes leading up to the bergschrund at the base of the south-east precipices. This snow-covered mount has been named 'The Dome' by Arthur Coleman."