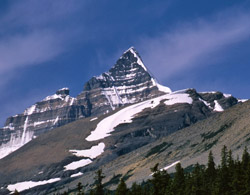 Mount Anne-Alice was named in 1939 by Anne MacLean Chesser and Alice Wright. After climbing the peak and finding no evidence of previous climbers they built a stone cairn at the summit, and claimed first ascent. Anne MacLean came from Nova Scotia in 1930 to visit her sister Sophie MacLean Hargreaves, and brother-in-law, Roy. She married Chuck Chesser in 1931 and they all became partners in the tourism and outfitting business at Mount Robson. Alice Wright was a frequent visitor at Berg Lake Chalet through the '30's and '40's. In 1959 she purchased Mount Robson Ranch from Roy & Sophie Hargreaves, and was a well-known member of the tourism/outfitting industry throughout the Rockies. In 1977 she sold Mount Robson Ranch and retired.