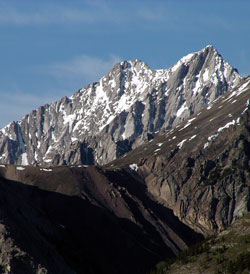 An outstanding little peak, Mount Denny features a distinctive double summit. Mount Denny, together with nearby Mount Potts, were named in 1974 by Glen Boles in honour of the one hundredth anniversary of the arrival in Alberta of the Northwest Mounted Police. Sir Cecil Denny was one of the original group of NWMP that marched from Dufferin, Mantioba to Fort Macleod in 1874. He describes the march and the early years of the Force in his book, "The March of the Mounties. He later became an Inspector with the Northwest Mounted Police and continued to serve until 1881. Later he worked with the Dept. of Indian Affairs until 1885 when he established a ranch in the Porcupine Hills west of Fort Macleod. In 1915 he wrote, "The Riders of the Plains." The peak was named during the centennial year of the NWMP.