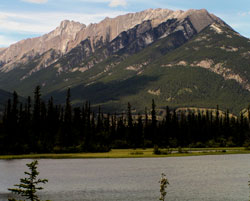 Roche Pierre-Jean De Smet is a twenty-five kilometre long ridge which lies north of the Athabasca Valley and to the west of the valley of the Snake Indian River. A Jesuit Priest, Father Pierre-Jean Pierre-Jean De Smet travelled widely in the mountains during the mid-nineteenth century as a missionary. The natives at Jasper House, which was located just downstream from the foot of the ridge, had great respect for Father Pierre-Jean De Smet and, according to him, decided to honour the missionary. "Each one discharged his musket in the direction of the highest mountain, a large rock jutting out in the form of a sugar-loaf, and, with three loud hurrahs, gave it my name."

Father Pierre-Jean De Smet was a Catholic missionary who travelled through much of the Canadian Rockies in 1845 and 1846. He regularly wrote long and interesting letters to his "Superior" which are delightful descriptions of the landscape and the natives which he was working with. His writings, entitled "Oregon Missions and Travels over the Rocky Mountains" were published in book form in 1847.

Much of the book is concerned with his work as a priest but it also contains some interesting references to the mountains. The map which accompanied the book covers a vast area from 44 degrees to 54 degrees latitude and from the Pacific Ocean to well east of the front ranges of the mountains. Although it is primarily concerned with rivers, it does note the locations of several mountains which must have been considered to be particularly noteworthy at that time. One of these is the legendary Mount Brown with its elevation of 16 000 feet. Another is "Devil's Nose" which probably was the peak we now know as Devil's Head. Also noted on the map is "The Pyramid" which was almost certainly the peak now known as Mount Assiniboine.

The book also contains many amusing anecdotes, many of which describe incidents involving his size and his somewhat limited skills in horsemanship and wilderness travel.

He was said to have been a popular, jovial man but considerably overweight and negotiating between the trees on horseback was difficult for him at times. He wrote, "I have a little word of advice to give all who wish to visit these latitudes. At the entrance of each thick forest, one should render himself as slender, as short, and as contracted as possible...Not withstanding these precautions, it is rare to escape without paying tribute in some manner to the ungracious forest. I one day found myself in a singular and critical position: in attempting to pass under a tree that inclined across the path, I perceived a small branch in form of a hook, which threatened me. The first impulse was to extend myself upon the neck of my horse. Unavailing precaution! It caught me by the collar of my surtout, the horse still continuing his pace. Behold me suspended in the air, struggling like a fish at the end of a hook. Several respectable pieces of my coat floated, in all probability, a long time in the forest, as an undeniable proof of my having paid toll in passing through it. A crushed and torn hat, an eye black and blue, two deep scratches on the cheek, would, in a civilized country, have given me the appearance rather of a bully issuing from the Black Forest, than a missionary."

or possibly as Mount Grainger.

Looking to southwest to Roche De Smet from Highway #16