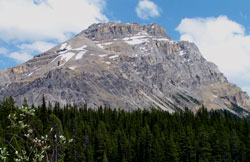 Photo: Mount Andromache from the northwest on the Icefields Parkway

Although the "Climber's Guide to the Canadian Rockies" lists the first ascent of Mount Andromache to have been recorded in 1940 by C. Cromwell, E. and Mrs. Cromwell, Graeme Pole has published a photograph taken from the summit by James McArthur in 1887. In Greek mythology, the heroine Andromache (Pronunciation: an-dro'-ma'kee) was the daughter of King Eetion of Thebe. She became the wife of the great Trojan hero Hector, and bore him a son named Astyanax. Andromache played a small but important role in Homer's Iliad. One of her most memorable appearances in the epic is a poignant scene with her husband Hector. Hector, taking a momentary leave from the bloody battlefield, returns to see his wife and child: "There his warmhearted lady came to meet him, running; Andromache, whose father, Eetion, once had ruled the land under Mount Plakos, dark with forest, at Thebe under Plakos - lord and king of the Kilikians. Hector was her lord now, head to foot in bronze; and now she joined him. Behind her came the maid, who held the child against her breast, a rosy baby still, Hectorides, the world's delight, as fresh as a pure shining star. Skamandrios his father named him; other men would say Astyanax, 'Lord of the Lower Town,' as Hector singlehandedly guarded Troy. How brilliantly the warrior smiled, in silence, his eyes upon the child! Andromache rested against him, shook away a tear..." The touching reunion was to be short lived, however. In the course of the Iliad, Hector is killed, and the Greek victors ransack Troy, taking prisoners and mercilessly dispatching their remaining enemies. Andromache and her son are two of the unfortunate victims, for she is taken captive by Neoptolemus (the son of Achilles), while the baby Astyanax is thrown from the towers of Troy. Andromache survived the horrors of the Trojan war, and as the concubine of Neoptolemus, she bore the Greek hero three sons - Molossus, Pielus, and Pergamus. After the death of Neoptolemus, Andromache married the Trojan seer Helenus. What would James Hector think of all this I wonder?

Photo: Mount Andromache from the northwest on the Icefields Parkway