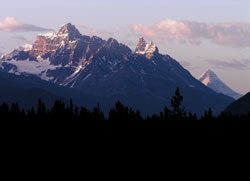 Photo: Looking south to Mount Confederation (Mount Columbia beyond at right) from Ranger Creek on the Icefields Parkway

During his extensive climbing and exploration trip in 1927, Alfred Ostheimer, together with guide Hans Fuhrer attempted to climb the mountain. It was the first to catch their eye on this trip, Ostheimer writing, "Our attention was chiefly centred on a high, turreted, rock-bound massif, a huge group of mountain heights covered with spires and gendarmes, that rose ahead of us on the left." After a very long day attemting to climb it, they elected to leave it for another day. Ostheimer later wrote in "Every Other Day," "Beyond a doubt that peak should have a name. Why not call it, "Mount Confederation" and thus commemorate among the Rocky Mountains of Canada the July fourth of the Dominion, Confederation Day!" With this. . . the mountain honouring the confederation of provinces to form Canada was named by an American. It would be another twenty years before the mountain was climbed. A striking peak, its rose-brown towers culminate in a pyramid shaped summit and from this, and all angles, the mountain appears to be a rather difficult climb. In fact six attempts to reach this summit failed before Mr. and Mrs. John Mendenhall, who had failed in their attempt in 1940, returned in 1947 to complete the first ascent. They noted that part of the mountains "allure" was that it was one of the few unclimbed mountains visible from what was then known as the Banff-Jasper Highway.

Photo: Looking south to Mount Confederation (Mount Palmer beyond at left) from the Ranger Hill Viewpoint on the Icefields Parkway

Photo: Looking south to Mount Confederation (Mount Palmer beyond at left) from the Ranger Hill Viewpoint on the Icefields Parkway