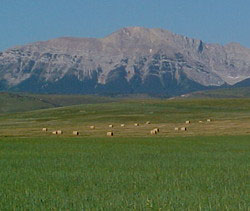 The Interprovincial Boundary Commission atlas referred to the peak as Mount Centre.

The mountain has been important in the lives of the Hucik Family who homesteaded below the peak in the very early 1900's. The original house, barn, and sheds still stand at the base of Centre Peak today. In the 1930's, the Hucik brothers - Peter, William and Louis, built a large rock cairn at the top of Centre Peak. It remains today, visited from time to time by the current generation. In 2001, family members placed a plaque on the cairn, commemerating the Hucik brothers. [Tracey Preston-Hucik]