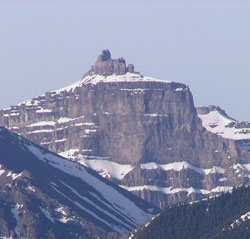 Province: Alberta
Headwater: Oldman
Visible from Highway: Gladstone Valley Road
Year Named: 1915
Named for: This peak is part of Windsor Mountain, formerly known as Castle Mountain. When the mountain was renamed, the high point on the west end was named Castle Peak.

Windsor Mountain is a high point on the ten kilometre long Windsor Ridge that lies between Mill Creek Valley and the Castle River Valley. Castle Peak is the prominent high point at the northwest end of the mountain. "Looking to the mountains ahead of us I picked out the most prominent, and took bearings on them. There were two near one another bearing thirty miles south, one of which, from the resemblance to a castle on its summit, I named Castle Mountain." The peaks at the head of the Gladstone River clearly caught Thomas Blakiston's eye as he travelled along the eastern edge of the Rockies in 1858. He named it Castle Mountain, its fortress like appearance being particularly obvious from the north as he saw it. However his colleague with the Expedition, James Hector, had also named a Castle Mountain in the Bow Valley between Banff and Lake Louise. In 1915 Blakiston's Castle Mountain was renamed Windsor Mountain since it was felt that the profile of the mountain resembled Windsor Castle in England. The name "Castle" was retained however, when it was decided to name the highest of the two peaks Castle Peak. The Natives had referred to this peak as "Queen Mountain." This prominent peak (and Windsor Mountain as a whole) has a distinctive look about it compared to the other mountains in the area and there is a geological reason for this. Windsor Mountain shows up clearly on a surface geological map as an "island" of Paleozoic Rock within a large area of Pre-Cambrian. This is apparent when one looks carefully at the cliffs of Windsor Mountain and notes their colour and the layering of the cliffs which is much more similar to mountains farther north than it is to neighbouring peaks. GEOLOGY OF THE SOUTHWESTERN CORNER OF ALBERTA South of the Bow Valley the geology of the mountains remains quite consistent until about forty kilometres north of the international border. Until this point the trend of the Front Ranges and the Continental Divide has been slowly curving away from the general northwest-southeast trend of the Canadian Rockies. In fact, just north of Highway #3 both the Livingstone and High Rock Ranges trend almost exactly north-south. About ten kilometres south of Beaver Mines a significant change in the geology of the Front Ranges occurs with very noticeable changes in the orientation of the mountain front, the erosional characteristics of the rocks, and the general "look" of the peaks. At this point the trend of the Front Ranges abruptly changes from north-south to northwest-southeast and for a distance of approximately 25 kilometres, from Syncline Mountain on the border to Prairie Bluff, the trend is essentially east-west. North of this point Pre Cambrian Rocks are not seen at the surface in the thrust faulting which created the Front Ranges. South of Beaver Mines, the Lewis Thrust Fault, which began at Mount Kidd in the Kananaskis Valley, cuts more deeply and the Pre Cambrian rocks are brought to the surface. Throughout this area they are virtually the only rocks to be found from the initial mountain slopes to the Continental Divide, some twenty kilometres to the west. The PreCambrian rock exposed in the mountains of southwestern Alberta is said to be among the best preserved sedimentary rock of that age in the world and is well over one billion years old. Rocks of the Precambrian age are in excess of 570 million years old and fossils found in them are of only the most primitive animals such as sponges and worms. Mountains composed of rocks of this age can be found near where the Continental Divide enters Alberta from the north, until just south of Lake Louise. From this point they do not appear again in Alberta until the area south of Beaver Mines. These Precambrian Rocks are made up of layers of sandstones, shales, limestones, and dolomites of the Purcell Group and are more easily eroded than the hard Paleozoic limestones which form the steep cliffs of the Livingstone Range to the north. This is why this area includes a number of individual peaks whereas the Livingstone Range, particularly south of the Oldman River tends to have few isolated mountains. Windsor Mountain (including Castle Peak) is an anomaly in this area because it is made of much younger limestone of Paleozoic age.

Photo: Looking south to Windsor Mountain with Castle Peak at right from the Gladstone Valley Road

Looking south to Castle Peak from the Gladstone Valley Road