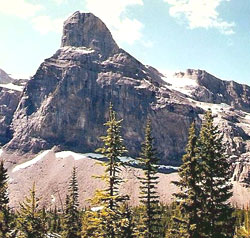 In Volume I of the Interprovincial Boundary Survey, Arthur Wheeler and Richard Cautley wrote, "On the Alberta side, the approach (to Assiniboine Pass) is most impressive; a great barrier of rock, up which the trail zig-zags, closes the head of the valley about half a mile from the summit of the pass. On either side the barrier extends in mighty precipices, those on the north disclosing near sky-line a colossal cave entrance, so placed as to be practically impregnable; it has given the name Cave Mountain to the eminence on which it is set." On the opposite side two wonderful rock faces rise perpendicularly above the valley floor for 2700 and 2500 feet respectively, the higher or eastern one being shown of the map as Gibraltar Rock and the other as Cascade Rock, a glacier in the depression between them sends a remarkable waterfall in a straight drop of over 1000 feet to the valley below. These two very spectacular heights are outliers of Mount Cautley."