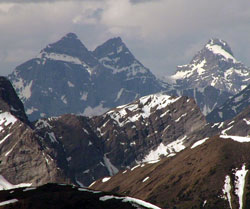 50.4656N -115.145W
Located in the White River Valley at the head of Cordona Creek and the head of Abruzzi Creek; north buttress of the Pass in the Clouds

Author Raymond M. Patterson referred to Mount Cadorna, Mount Swiderski, and Mount Battisti as the Three Giants of Nyahe-ya-'nibi, translated from the Stoney as "Go up to the mountains country." [Finch] George Pocaterra was the one who gave the group the name. In his book, “The Buffalo Head,” Patterson wrote of their trip to the area, “For Pocaterra this trip was, in a sense, a pilgrimage. As a very young man he had hunted with the Stoney Indians in the country to which we were going; and while it might now we known to a few as the West Fork of the Elk, to Pocaterra it was still the hidden valley, the valley of youth. He called it always by its Stoney name, Nyahe-ya-‘nibi, the ‘Go-up-into-the-mountains-country’; and I can see now the name translated, in an article that he wrote of the Italian Alpine Club Journal, as ‘Il paese nel cuor delle montagne’ –‘The country in the heart of the mountains.’ No better name could be found for that great, silent meadow, six thousand feet above the sea, ringed around by glaciers and by mountains that rose to 11,000 feet, shut off from the world by passes that were no better than goat trails, by drowning rivers, a wild torrent and a tangle of huge, fallen trees. . .” Patterson would undoubtedly have enjoyed seeing these three impressive peaks from the summit of Holy Cross Mountain just west of his ranch in the Highwood Valley.