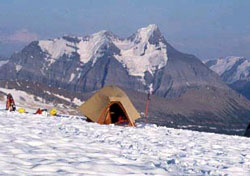 A truly magnificent peak, Mount Bryce stands at the southern end of the Columbia Icefield.

James Outram, who together with Christian Kaufmann, completed the first ascent of Mount Bryce in 1902, wrote, "Projecting westward from the Continental watershed, the mountain rises in splendid isolation from a massive base to a long and extremely narrow ridge, crowned by overhanging cornices of snow, and culminating in three sharp peaks of increasing elevation in the direction of the ever deepening valleys, till the final, sudden precipice of the main summit looms almost vertically above the timbered slopes and foaming torrent of the Bush River, more than 8000 feet below. Its rugged flanks present a long expanse of rocky walls."

In "Pushing the Limits," his history of mountaineering in the Canadian Rockies, Chic Scott describes it as, "a complex peak with three summits, long and intricate ridges, and a north face rising 2000 metres above the Bush River."

Leopold Amery visited the area in 1929 and, accompanied by Edward Feuz jr., climbed to within 250 feet of the summit. In his book "In the Rain and the Sun" he wrote that, "Mount Bryce from the south is a truly imposing spectacle. A tremendous triangle, almost a steeple, of sheer rock, facing approximately sonth-west, soars into the sky. From it to right and left descend two curving curtain ridges, enfolding a glacier between them."

Photo: Mount Bryce from the north on Castleguard Shoulder