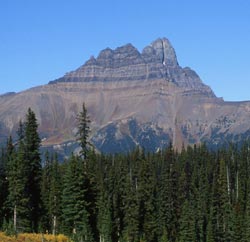 The Miette River flows from the north-west between the mountains of the Continental Divide and Mount Bridgland. Arthur Wheeler originally chose a rather unusual name for the mountain. While surveying, the usually staid and serious surveyor decided that the peak looked similar to a child's toy locomotive from where he was looking at it and should be called Mount Toot Toot. He referred to it as such on the map he made at the end of the season's work. However six years later, the peak was officially named in honour of Morrison Bridgland, one of his ablest assistants. Morrison Bridgland was educated at the University of Toronto and became qualified as a Dominion Land Surveyor. In 1902, he came west as an assistant to Wheeler. Athletic and very powerful, "Bridge" became respected as a tireless worker as he produced detailed and accurate maps over extensive areas of the Rockies particularly in Jasper National Park. Through his work he became a highly proficient climber. His climbing while undertaking topographical surveys was accomplished while carrying instruments and equipment weighing about thirty-five pounds. Like Arthur Wheeler, he was a founding member of the Alpine Club of Canada within which he was highly regarded both as a mountaineer and as a teacher. Arthur Wheeler's son wrote that, "He led party after party up the same climb, to him an easy and uninteresting climb, always safely, always with patience and good temper, and always with the utmost consideration for his party." Morris Bridgland's obituary in the Journal of the Alpine Club of Canada suggested that he was deserving of a higher, more prominent mountain than the peak that was named in his honour in 1918. Its author, C.B. Sissons wrote that, "The mountain which none too worthily bears the name of a great alpinist, who, I suppose, has climbed more peaks and pioneered more trails than any other Canadian, is near the Yellowhead Pass." Frank Smythe wrote numerous books about the mountains of the world. He devotes a chapter in "Climbs in the Canadian Rockies" to the first ascent of Mount Bridgland, describing the mountain and the climb as follows, "...a peak of humble elevation which proved to be a most worthy mountain and provided an ascent quite out of the ordinary." THE BRIDGLAND REPEAT PHOTOGRAPHY PROJECT In 1915, Morrison Bridgland took 735 photographs from 92 survey stations on mountain peaks and ridges in Jasper National Park in order to make a topographical map. During 1998 and 1999 members of the "Repeat Photography Project" re-occupied all 92 stations and rephotographed all 735 images. The purpose is to show changes in the cultural and physical landscape of the park over the last century. To learn more about this wonderful project and view the images visit http://bridgland.sunsite.ualberta.ca Please note that there is a Bridgland Peak as well as a Bridgland Glacier and a Bridgland pass about 20 km north of Mount Revelstoke National Park in the Selkirk Range.

Photo: Looking northwest to Mount Bridgland from Hwy. #16 east of the Continental Divide.