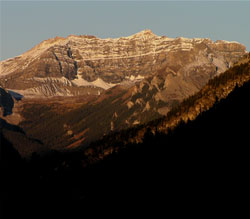 Photo: Mount Brett from the eastern end of the Bow Valley Parkway

DR. ROBERT G. BRETT "ONE OF THE LAST GREAT PIONEERS OF THE WEST" -by Dr. J. Robert Lampard Western Canada's medical past has no more illustrious character and no greater contributor than Dr. Robert George Brett. Born in Strathroy, Ontario in 1851, Dr. Brett studied medicine at the University of Toronto and pursued postgraduate work in New York, Philadelphia, and Vienna. Dr. Brett came to Alberta in the summer of 1885 aboard the second official train into Calgary whose population at the time was 100 plus the Canadian Pacific Railway construction crews. Dr. Brett spent a considerable amount of time in Siding 29, later renamed Banff, surveying the hot water opportunities and the commercial potential of the sulphur mineral waters that flowed from the foot of Sulphur Mountain. By 1885, Dr. Brett and the CPR applied to the federal government for a hot springs lease. He envisaged a spa in the European tradition and obtained support for the claims about the value of mineral springs to cure chronic diseases. Dr. E.A. Braithwaite said Dr. Brett, "started off his first Banff hospital in an old shack until he could raise funds of a finer building." In 1886, Dr. Brett built the Grandview Hotel, now the Rimrock Hotel site. The following year, he built the Banff Sanitorium where he served as a medical doctor. Both facilities were in operation before Banff Springs Hotel opened in 1888. The Brett Sanitorium consisted of fifty tourist or hotel beds, forty invalid beds, a separate hospital building and a dozen tubs and plunges. Dr. Brett never turned anyone away but did charge Sir Hugh Allan (see Allan Peak), owner of the Allan Steamship Lines, $900 for a Banff Springs Hotel house call. In 1909, Dr. Brett established the Brett Hospital where he served as senior surgeon. Once his entrepreneurial ventures were well underway, Dr. Brett entered politics in 1888. He was elected as the Conservative member for Red Deer in the first Northwest Territorial election, and he represented the Red Deer constituency continuously until 1899. The first premier of the Northwest Territories was Frederic W. Haultain, with Dr. Brett serving as leader of the opposition. In 1896, he introduced the issue of provincial autonomy into the territorial legislature, proposing that the districts of Alberta and Athabasca become separate provinces. During his elected term, Dr. Brett petitioned vigorously for provincial status for the prairies. Eventually six different subdivisions would be proposed. Dr. Brett was one of the first to support the two-province concept which would extend north for the 49th parallel. After Alberta became a separate province, Dr. Brett ran in the 1905 and 1909 elections but was defeated in both. After his political defeat, Dr. Brett's attention returned to medical pursuits. In March 1906, Dr. Brett was instrumental in forming the Alberta Medical Association. Elected the first president of the Alberta Medical Association, he would hold the AMA presidency again in 1914. He was also elected the first president of the Alberta College of Physicians and Surgeons in 1906, a position he would again hold in 1919. In 1915, Prime Minister Robert Borden recognized Dr. Brett?s thirty year contribution to medical care and politics in the NWT and Alberta by appointing him to be the second Lieutenant Governor of Alberta, a post he held until 1925. At the time of his death on September 16, 1929 the name Brett had become synonymous with Banff. Banff closed all of its schools and stores for a day of mourning. Future Prime Minister R.B. Bennett sent a personal and thoughtful telegram which read, ?Brett was one of the last great pioneers of the West. . . He will be remembered a great physician, a devoted public servant and useful citizen. . . a steadfast and loyal friend who effused a spirit of optimism and happiness. . .We shall not look upon his like again.?