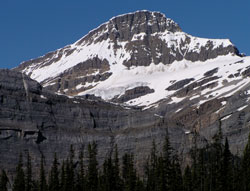 Photo: Breaker Mountain from the Icefields Parkway near Silverhorn Creek

51.7633N -116.651W
Located on the continental divide in the Mistaya River and Blaeberry River Valleys at the head of Breaker Creek; above Mistaya Lake;