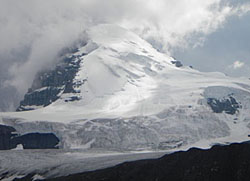 Range: Brazeau
Province: Alberta
Park: Jasper
Headwater: Athabasca
Ascent Date: 1923
Ascent Party: A. Carpe, W.D. Harris, Howard Palmer
Year Named: 1902
Named by: Arthur Coleman
Named for: Brazeau, Joseph. E. (The mountain was named by Coleman in 1902. Hector had named the Brazeau River after an employee of the HBC. Mr. Brazeau served as a clerk and postmaster and was of great assistance as a translator to the Palliser Expedition.)

In 1902 Arthur Coleman's party made an attempt to climb Mount Brazeau. "From our beautiful camp ground we had a broad view of the mountain and icefield four miles to the north-west, and arranged for an attack upon it next day." Upon reaching the soft snow on the Glacier the travelling became difficult. Higher up the footing was better but crevasses and avalanches posed problems. "Halting on some projecting rocks at 10,550 feet, we held a council of war and decided that further climbing was too dangerous to risk. From clinometer readings made at our earlier halts the top of Brazeau Mountain, as we named it, is about five hundred feet above our stopping-point." When Howard Palmer's party set out to attempt the first ascent in 1923 they were uncertain as to the exact location of the mountain. After several days of exploration they, "were thrilled to behold a shining snowfield. . .extending for miles in every direction." Of the view from the summit of Mount Henry Macleod, Palmer wrote that, "A splendid new peak cleft the clouds like an incandescent blade. Brilliant with fresh snow, its shapely crown reared itself over impregnable precipices on east an north. Our quarry at last. . .We had camped at its base for a weeek without ever suspecting its identity." JOSEPH EDWARD BRAZEAU Joseph Brazeau began fur trading in the 1830's along the Yellowstone and Missouri Rivers before joining the Hudson's Bay Company. According to Anne (McMullen) Belliveau in "Small Moments in Time," his "attire was somewhat unusual and, according to a family description, he sported a cloak rather than a coat and wore a flat, black Spanish sombrero on his auburn hair. He could speak nine languages. Brazeau was also of considerable help to the Palliser Expedition."