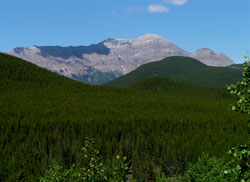 Photo: Bluerock Mountain from east on Highway # 546 in the Sheep River Valley

Province: Alberta
Park: Kananaskis
Headwater: Bow
Visible from Highway: 546
Year Named: 1913
Named for: Bluerock Mountain's name is probably based on the fact that mountains like Bluerock, which are closer to a viewer on the prairies, appear darker or bluer than more distant peaks.

Bluerock Mountain is easily recognized from the prairies, partly because it lies about five km to the east of the main fromt range. It features a long east-facing escarpment that from the summit stretches a considerable distance to the south befoe descending into the low forested hills. Because Bluerock is closer to a viewer on the prairies, it appears a darker blue than more distant peaks.

*A hiking route to the summit is described in Gillean Daffern?s Kananaskis Country Trail Guide.