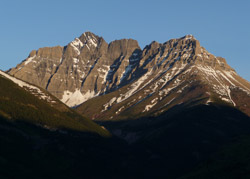 Province: Alberta
Park: Waterton
Headwater: Oldman
Visible from Highway: 6, Red Rock Canyon Road
Year Named: 1858
Named by: Thomas Blakiston
Named for: Blakiston, Thomas (Thomas Blakiston was a member of the Palliser Expedition and one of the first scientists to visit southern Alberta and the area that is now Waterton National Park.)

Mount Blakiston is the highest summit in Waterton National Park. A good roadside viewpoint for a look at this impressive mountain is from the Waterton Townsite access road, 1.2 km west of the junction with Highway #6. From here the valley of Blakiston Creek permits a good view of the steep cliffs of its southeast face. Driving up the Blakiston Creek Valley towards Red Rock Canyon provides even better roadside views.

The east and south facing cliffs of Mount Blakiston provide an excellent view of the Purcell Sill. This is a horizontal layer of greenish-black diabase that, while still molten, was squeezed between the sedimentary layers. Diabase is the coarse-grained equivalent of basalt.

Thomas Blakiston was a remarkable man who travelled the world pursuing adventure and his scientific interests. Born in England, he obtained a commission as a Lieutenant in the Royal Artillery, serving in England, Ireland, Nova Scotia, and the Crimean War. Sir Henry Lefroy (see Mount Lefroy) had travelled widely in northern Canada studying the Earth's magnetic field and recommended that Blakiston join the Palliser Expedition as the "magnetic oberver."

In 1858 Blakiston travelled west with the Palliser Expedition in the capacity of magnetic observer with a special assignment to explore the southern passes of the Rockies to determine a feasible route for a transcontinental railway.

Lieutenant Blakiston was certainly gifted but he may have been difficult to work with. He had his differences with John Palliser. After setting off to the mountains with Eugene Bourgeau and James Hector, Blakiston left a letter for Palliser, "wherein I threw off his command." Setting out on his own he travelled down the eastern edge of the Rockies, along the route of the present day Highway #22 from Turner Valley to the Crowsnest Pass and into the southwest corner of what is now Alberta. Here he thoroughly explored the Kootenay Passes area (in particular North Kootenay Pass), determining that it was wholly in British Territory and considered its suitability for a railway. Later he travelled over South Kootenay Pass, following Blakiston Creek past what is now Mount Blakiston to the series of lakes which he named Waterton.

Although he followed the previously issued instructions regarding his exploration objectives and used expedition men, horses, and supplies, Blakiston refused to hand over his observations, and maps for the Expedition's records. Returning to England in 1859 he submitted a separate report on his own personal findings.

The year 1861 found this adventurer very far from these mountains as he led an expedition up the Yangtze River in China, travelling 1500 kilometres further up the river than any Westerner had previously reached. After retiring from the army he visited Japan by way of Russia and Siberia where he pursued business interests. During the 1870's, he compiled a catalogue on the birds of Japan which was the authoritative document for years in that country.

Looking west to Mount Blakiston from the Red Rock Canyon Road. Note the Purcell Sill on the lower cliffs at right.