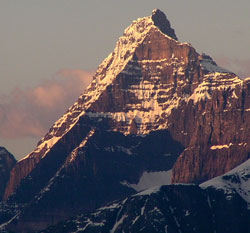 Photo: Looking south to Blackfriars Peak from the Ranger Hill Viewpoint from the Icefields Parkway

A large "massif" of extremely rugged terrain featuring steep cliffs and a spectacular tower lies between the Athabasca River to the east and the Chaba River Valley to the west. In 1901, at the suggestion of Jean Habel, the high point on the eastern edge was named Blackfriars Peak. The mountain reminded Dr. Habel of a peak in Europe with a similar name. Unclimbed until 1953, the first ascent of this impressive mountain was led by Walter Perren who in 1950 had become one of the last two alpine guides brought to Canada from Switzerland by the Canadian Pacific Railway.