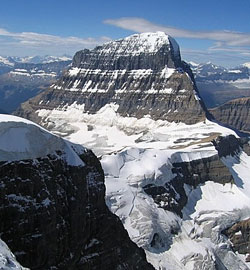 Norman Collie, who named the mountain first saw it from the summit of Mount Athabasca. Looking to the north he saw a, "high, flat-topped peak ringed around with sheer precipices, rearing its head into the sky above all its fellows." Later Collie and his party travelled closer, noting Mount Alberta's, "overpowering mass (that) towered frowning many hundreds of feet above us. It is a superb peak, like a gigantic castle in shape, with teriffic black cliffs falling sheer on three sides. A great wall of dark thunder-cloud loomed up over its summit; and there was a sublime aloofness, an air of grim inaccessibility about it that was most impressive."

Howard Palmer wrote that, "Its terrific precipices render it straight and forbidding, a grim-visaged peak of terror. . .The ancients would have found it an admirable model for the Tower of Babel. . . In all probability Alberta will eventually be rated as technically the most difficult of the major peaks of the Canadian Rockies. It possesses no easy side. . ."

Frank Smythe, a British mountaineer who wrote numerous books regarding mountains, described it in, "Climbs in the Canadian Rockies" as follows: "I first saw it from the air in 1944, and was greatly impressed by it; for it is a peak of terrific aspect, a wall-sided elemental wedge rising sheer out of the valleys and surrounding glaciers. Isolated as it is and exposed to the full force of the western weather, it remains iced and utterly impregnable for weeks, and in a bad season months, on end."

An extraordinarily beautiful but dangerous mountain, Mount Alberta was the last of the major peaks in the Rockies to be climbed. Its allure is heightened by the fact that it cannot be seen from any highway. There is no easy way to the summit and there are major difficulties involving weather, loose and falling rock, and ice covered cliffs. The greatest difficulty is said to be the formidable series of black cliffs that surround the mountain. The upper tier varies in height from 300 to 600 feet and provide no couloir or gully through them.

Howard Palmer and J.W.A. Hickson made an expedition into the area in 1924 but bad weather forced them to leave without attempting an ascent.

The first ascent was completed the following year and was the first expedition by the Japanese Alpine Club into mountains outside its country. The crux of the climb occurred when the party found itself on a narrow ledge below a rock overhang 12 feet above them. After deliberating, they decided that only an extreme and unusual technique would allow them to continue the climb. One climber stood facing the wall and another climbed up on his back and anchored his legs around the first climber's shoulders. Then a third climbed up the human ladder and stood on the second climber?s shoulders in order to overcome the obstacle. Above the overhang, the walls continued to rise in an extremely steep series of ledges but finally the summit ridge was attained.

Upon reaching the top of the mountain, the party ceremoniously planted an ice axe into the frozen summit leaving it as a monument to their efforts. Over the years the axe lay embedded on the summit and grew in local lore, taking on an almost mystical, magical lustre. For the next 23 years the legend of the ice axe on Mount Alberta grew, some saying it was made of solid silver and others that it was the Japanese emperor's personal ice axe, blessed by him and carried to the summit by his loyal mountaineers.

Two Americans, Fred Ayers and John Oberlin made the second ascent of the peak in 1948. They found the fabled axe but it was just an ordinary, wooden Swiss style one. When they tried to remove it, it cracked three-quarters of the way down the shaft. They then took the top part to New York where it was placed in the custody of the American Alpine Club.

The first Canadian ascent of the mountain was completed in 1958 by Neil Brown, Heinz Kahl, Sarka Spinkova, Hans Gmoser, and Leo Grillmair.

In 1965, a Japanese party led by Kenichi Here and guided by Hans Gmoser climbed the mountain and removed the lower part of the axe left behind in 1925 and took it back to Japan. Then in 1993, Jasper mountaineer Greg Horne came across the top part of the axe (labelled "Mount Alberta-1948") wrapped in a bundle of old ice axes under a table in the archives of the American Alpine Club. The axe was then returned to Canada in 1995.

Finally in 1997, at a ceremony in Tokyo attended by the Japanese Prime Minister, eight hundred members of the Japanese Alpine Club, and representatives from the Alpine Club of Canada, the two parts of the "Mount Alberta Ice Axe" were reunited. "It was just unbelievable the way the two pieces matched up," said Mike Mortimer, president of the Alpine Club of Canada. "It was as if they had been broken yesterday. It was a perfect match."

Plans were made for a small Japanese-Canadian expedition to carry the fabled axe to the summit of the mountain in the year 2000 on the 75th anniversary of its first ascent. However it was not possible to make the ascent due to unfavourable ice and snow conditions on the mountain.

The first winter ascent of Mount Alberta was completed in March, 2005 by Scott Semple, Eamonn Walsh, and Raphael Slawinski.

For mountain enthusiasts who are limited to their cars, it is somewhat frustrating that one of the most outstanding peaks in the Canadian Rockies cannot be seen from a road. For hikers though, an easy walk along the well travelled trail to Parker Ridge provides at least a distant view of Mount Alberta.