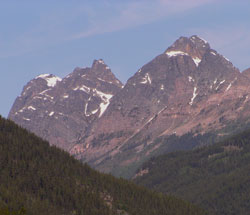 Yellowhead Mountain lies to the northwest of Yellowhead Pass and Yellowhead Lake. It is not certain who the pass, and subsequently the mountain, was named after but it is most likely that they were named after Pierre Bostonais, a blonde Iroquois trapper who was nicknamed “Tete Jaune” (yellowhead). In 1820 he guided one of the first Hudson Bay Company parties through the pass. Seven Sisters was the name originally given to Yellowhead Mountain. Interestingly, there remains a Seven Sisters Mountain near the Continental Divide just north of Crowsnest Pass. There are four named high points on Yellowhead Mountain. From east to west they are Tete Roche, Lucerne Peak, Leather Peak, and Bingley Peak. The first three are on the Continental Divide but Bingley lies in BC. In their book, "The North-West Passage by Land" (1865) that describes their trip through the Rockies in 1863, Milton and Cheadle describe the view of the mountains from "Buffalo Dung Lake" (now known as Yellowhead Lake) and go on to write, "Two of these on opposite sides of the lake were particularly fine, one to the north-west, the other to the south-west; and the Iroquois assured us that they should be known from that time forth as "Le Montagne de Milord" and "Montague de Docteur." We, however, took the liberty of naming them Mount Fitzwilliam and Mount Bingley."