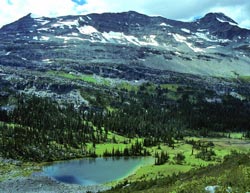 The first white man to cross Athabasca Pass was David Thompson of the North West Company in 1811. Sir George Simpson, a governor of the Hudson Bay Company during the first half of the nineteenth century said that it was always a mystery to him, "how any human being should have stumbled on a pass through such a formidable barrier..." [Fraser] Thompson had discovered Howse Pass in 1807 and using it as a trade route, established himself and his company with the Kootenay Indians in British Columbia. In the fall of 1810 he set out with a supply of trade goods to cross the pass but was blocked by a Peigan war party who objected to his trading with the Kootenays. Instead of retiring to Rocky Mountain House for the winter, Thompson set off with no trail, limited supplies, and the threat of being caught by hostile Indians to try to locate and take his goods though a yet to be discovered pass in the dead of winter.

With thirteen men on snowshoes and eight dogsleds, Thompson passed below what is now Mount Edith Cavell in early January and began the 48 kilometre ascent to the headwaters of the Whirlpool River. He was well aware of the difficulties he faced. "My men were the most hardy that could be picked out of a hundred brave hardy men," he later wrote.

After six days of struggling though metres of fresh, wet snow they reached the treeline and, "The view now before us was an ascent of deep snow, in all appearance to the height of land between the Atlantic and the Pacific Oceans; it was to me an exhilarating sight, but to my uneducated men...the scene of desolation before us was dreadful." Thompson''s epic struggle continued as he began to descend the west side of the pass where he wrote, "Part of my men had strong feelings of personal insecurity." However Thompson and his party persevered, reached the Columbia River and on July 15th, the Pacific Ocean.

The pass became the main fur trade route across the Rockies for the next half century. With forty kilogram packs the ascent was always a challenge. One early traveller who crossed the pass in the summer counted 62 fords before reaching the summit. Gabriel Franchere traveled through the pass with the spring fur brigade of 1814. "We were obliged to stop every moment to take breath, so stiff was the ascend," he wrote. "After two or three hours of incredible exertions and fatigues, we arrived at the plateau or summit. On either side were immense glaciers or icebound rocks."

An exchange of goods, letters, and individuals often took place on the summit of the pass itself, one group having made the journey up the Columbia River by boat to "Boat Encampment," and then up the Wood River and finally Pacific Creek to the pass. The party from the east would journey from Edmonton by boat and pack train, following the Athabasca and Whirlpool Rivers.

Hudson''s Bay Company Governor George Simpson traversed the Pass himself in 1824. He wrote, "At the very top of the pass or height of Land is a small circular Lake or Basin of water which empties itself in opposite directions and may be said to be the source of the Columbia and Athabasca Rivers as it bestows its favours on both these prodigious Streams. That this basin should send its Waters to each side of the Continent and give birth to two of the principal rivers in North America is no less strange than true both the Dr. [John McLoughlin] and myself having examined the currents flowing from it East and West and the circumstance appearing remarkable I thought it should be honored by a distinguishing title and it was forthwith named the ''Committee''s Punch Bowl.''" Fur-trade travellers paused at this natural campsite to drink a toast "to their Honours the Governors," the governing committee of the Hudson''s Bay Company in London.

In 1854, the Hudson''s Bay Company closed its operations in Oregon and moved its centre of activity to Fort Victoria on Vancouver Island. With no commercial significance traffic through the pass virtually ceased.