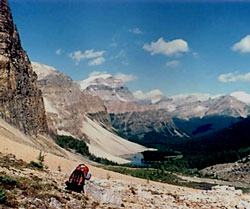 "As I smoked away, silent as all about me, suddenly a sharp clear whistle that awoke the echoes far and near, thoroughly roused me, and sent all other thoughts to the rout." This was John Keast Lord's introduction to the hoary or "whistling" marmot. Mr. Lord, a naturalist attached to the British Boundary Commission in 1961, was quietly smoking his pipe near the point where the provinces of Alberta and British Columbia, and the United States meet, above Cameron Lake in Waterton Lakes National Park.

Living in colonies, these badger-sized animals inhabit high alpine meadows and live in holes that they excavate, under large rocks if possible. They spend the summer eating as much grass, flowering plants, roots, and berries as possible in order to acquire a thick layer of fat to sustain them through seven or more months of hibernation.

Marmots are wary creatures, their predators being grizzly bears and golden eagles, and a group generally has a sentinel posted on a prominent boulder. Warnings of intruders entering their territory is given by a resounding, shrill whistle of alarm at the sound of which the colony often dashes off to the safety of their burrows. The sound of a marmot whistle is very special to most hikers and climbers who visit their habitat as it means one has reached the alpine level with all its special attractions.

Whistler Mountain, a mountain in the Castle River area, is named in honour of this animal that is a favourite of many hikers. Further to the northwest in the Egypt Lake area of Banff National Park there is a high valley known as Whistling Valley that culminates in Whistling Pass. Farther northwest lie two different Marmot Mountains, Marmot Creek, Marmot Pass, Whistlers Creek, Whistlers Pass, and a mountain near Jasper known as The Whistlers.

The animal's name is attached to mountain features in both official languages. The marmot was referred to by the early French Canadian fur traders as the "siffleur" after the French word "siffleur" which means "to whistle." Siffleur Falls, Siffleur River, and Siffleur Mountain all lie near the headwaters of the North Saskatchewan River in Banff National Park.

And lastly, the marmot's scientific name, genus arctomys columbianus, was the basis for the naming of Arctomys Peak and Arctomys Creek northwest of Saskatchewan River Crossing.

The fact that so many natural features in Alberta are named in honour of the hoary marmot indicates that it was a favourite of the early explorers and travellers as well as today's visitors to the alpine areas.