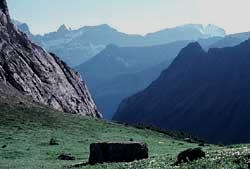 Photo: View looking down into the Palliser River from North Kananaskis Pass.

In 1854 James Sinclair led a party of settlers through this high pass and into the Columbia Valley. In 1841 he had taken a group of settlers through White Man Pass. The route chosen in 1854 would have made for a gruelling ordeal for 100 people and 250 head of cattle but the descriptions of the route written by Sinclair seem to confirm that they travelled over North Kananaskis Pass.

John Palliser is thought to have used this pass during his explorations in 1858 although some think that he entered into British Columbia by way of Elk Pass.