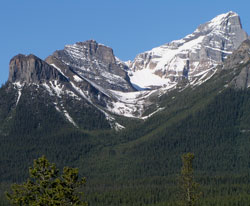 Photo: The Saddleback from Highway #1

One of the special things about The Saddleback is the view that it provides of nearby Mount TempleWalter Wilcox. In his book, "The World of Lake Louise," Don Beers wrote that Wilcox estimated that he made the trip to The Saddleback forty or fifty times.

In his book, "In the Heart of the Canadian Rockies" (1906), James Outram wrote, "To see Mount Temple in its noblest grandeur I would take you to the Saddleback. This is a broad green alp, nearly 2000 feet above Lake Louise, a very favourite hour's ascent by trail between Fairview MountainSaddle Mountain). Crossing the plateau to the tree-fringed brink of the abyss beyond, our gaze is carried straight across the chasm, 1500 feet in depth, to the huge peak."

A teahouse was built on The Saddleback in 1922 but operated only for one summer after it was determined that the water supply was not reliable. It was used as a hiker's shelter for the next twelve years and an associated shack was not removed until thirty years later. Don Beers speculates that the shack may have dated from 1909 as Wilcox mentions one in his 1909 guidebook.