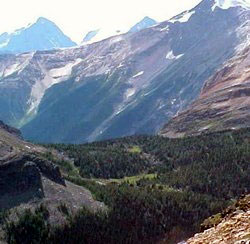 The pass is named after James J. McArthur, a surveyor who was likely the first non-native to visit it during a trip to the Lake O'Hara area in 1887. In his report on the work completed during the 1892 season, he wrote: "On the 14th August we started south up Cataract Creek which empties near Hector station, and that evening pitched camp on the divide leading to Ottertail River" (McArthur Pass).

It was during his work in the area that McArthur saw the lake that would eventually be named in his honour. He wrote, "From one station I counted sixteen alpine lakes, one of which is more strikingly beautiful than anything I have ever seen. It is about one half mile in length and lies between two high spurs to the east of the pass, at an altitude of about 8000 feet. The mountains rise like walls two thousand feet from the water's edge. A steep glacier comes in at the east end and the water undermining the ice causes large bodies to fall off and the surface of the lake is in consequence of the falling ice dotted with miniature icebergs." [Eternal Lake O'Hara -Carol Ann Sokoloff]

The McArthur Pass area is considered critical to the migration of grizzly bears and the McArthur Valley is closed to hiking until August 15th and after this date is only available to two parties per week.