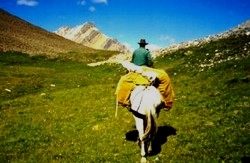 Photo: Entering North Fork Pass from the south -the first view of peaks beyond the Panther River

This high, very remote pass lies at the head of the north fork of the Cascade River and is the route into the headwaters of the Panther River. Its approach form the south is classic, with the trail petering out long before a grassy notch is reached. The descent into the upper Panther is a steep scree slope. It is said to be the most infrequently travelled of the high passes in Banff National Park.